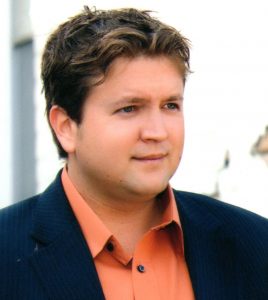 Steven Listopad is a Ph.D. candidate at North Dakota State University and has been an assistant professor of journalism and mass communication and student media director at the University of Jamestown and Valley City State University in Norwegian-rich North Dakota. He has taught journalism and media in China (2013); Nice, France (2014); Florence, Italy (2015); and Oslo (2016). Listopad has been honored with the Hugh M. Hefner Foundation’s First Amendment Award for Education, AEJMC’s Innovative Outreach to Scholastic Journalism Award, the Friend of Journalism Education Association award and the Distinguished Multimedia Adviser award from College Media Association. His converged student media center at UJ was a finalist in North Dakota’s annual professional entrepreneurial competition, InnovateND, and he was a 2015 Scripps Howard Fellow for Entrepreneurial Journalism. Before teaching, Listopad reported for a daily newspaper, an alternative weekly newspaper and a military newspaper. He also worked as a talent agency assistant and in post-production and international distribution and publicity at New Line Cinema in Los Angeles. Listopad is a music and culture enthusiast and lists Jonny Lang, Jesse Ventura, Gear Daddies and Skid Row as some of his favorite interviews.