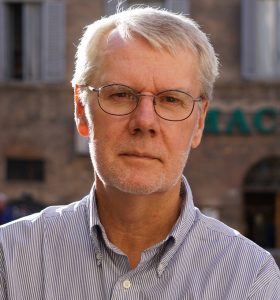 Steve Anderson, Ph.D. (Urbino, Italy) is a professor in the School of Media Arts & Design at James Madison University. Prior to entering academe, Anderson was an environmental reporter and weathercaster for KCNC television, a network O&O station in Denver, Colorado. His reporting often involved in-depth examination of local and regional environmental issues and an explanation of the science behind them. He also worked as a news photographer, weathercaster and news reporter at stations in Fresno, California and Fargo, North Dakota. He is an author of a textbook entitled “Exploring Electronic Media: Chronicles & Challenges” (Wiley-Blackwell Publishing). His websites have won top awards from the Broadcast Education Association (BEA Best of Festival) and the Association for Education in Journalism and Mass Communication (AEJMC Best of the Web Competition). Anderson is a former President of the Broadcast Education Association (BEA), the association for electronic media professors and industry professionals. He taught video in Urbino from 2011 through 2018 and directed the program since 2014. He created the websites for presentation of student work in each of those years. He also taught in Istanbul in 2015. Steve earned his Ph.D. from the University of Denver.