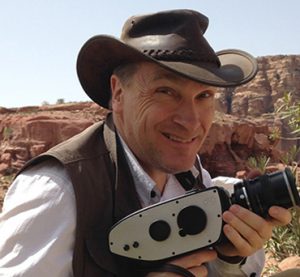 Kurt Lancaster is a professor of creative media and film at Northern Arizona University. He is the author of DSLR Cinema (Focal Press), Video Journalism for the Web (Routeldge), Production House Cinema (Focal Press), among other works. His students have gone on to create their own video production houses, worked as producers and cinematographers, as well as earning national and regional award winning films. Some of his clients have included: the Grand Canyon National Park, the Arizona Department of Forestry and Fire Management; The Christian Science Monitor; Timpanogos Caves National Monument for the National Park Service; the American Community School in Amman, Jordan; Ha:san Preparatory and Leadership School in Tucson, Arizona for the National Institute of Health; the Pedras Mesa Demonstration Ranch in Arizona; Altez Ecofarm at Hasta Gard in Stockholm, Sweden; the Law of the Desert Born graphic novel promo for Louis L’Amour Enterprises, Inc; the Institute of Tribal Environmental Professionals at Northern Arizona University. Kurt previously taught for ieiMedia in Istanbul, Turkey. He earned his PhD from NYU.