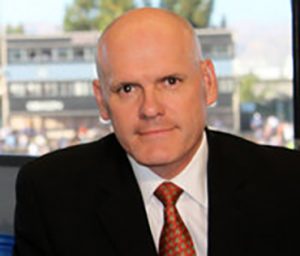 John Shrader (Valencia, Spain Director) is an assistant professor of Broadcasting at the University of Nebraska. He teaches courses in broadcast journalism, including news and sports journalism for both radio and television, and visual storytelling for all media. John spent 30 years as a broadcaster in San Francisco, for which he won an Emmy Award as an on-air host in 2009. He has equal experience in television and radio, on-air talent work and production. He brings all this professional knowledge to the classroom. John’s award-winning 2009 documentary film “Conflicted: The Barry Bonds Home Run Chase” explored media coverage of the complicated and controversial baseball star in his quest to set the all-time home run record. In 2013, his documentary film “Baseball’s Social Gathering” looked at how the process of gathering and delivering sports journalism has been dramatically altered by the new tools of social media and digital media. His most recent projects include a film documentary on the Long Beach Pow Wow, to be released in 2016; a one-hour radio documentary on LA sports radio which airs in Spring 2016; and chapters in two book projects, “Everything I Know about Relationships I Learned from Television,” and “Red, White, Blue and Green: Perspectives on the U.S.-Mexico Soccer Rivalry.”