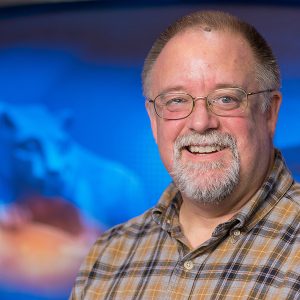 Chandler taught multimedia reporting and entrepreneurial journalism at Penn State University. In 2017 he was the multimedia coach for ieiMedia’s Oslo Rocks! music reporting program in Norway. He had more than 25 years of industry experience as a visual journalist, writer, editor and online producer. He taught photojournalism at Duquesne University and was the editor for online innovation at post-gazette.com in Pittsburgh before becoming a full-time educator in 2007. He coached student journalists in Hong Kong, Brazil and across the U.S. He produced the first multimedia workshop for the Vatican press corps in Rome. He was a video coach for the National Press Photographers Association and the Online News Association. In 1992 Chandler photographed a revival of the first rock concert, the Moondog Coronation Ball, for a special issue of Life magazine