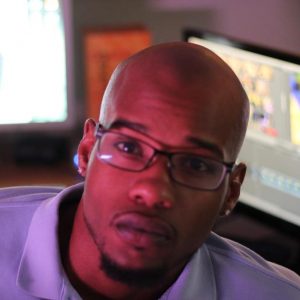 Brandon Coley is the Technical/Multimedia Adviser for the award-winning student newspaper, The News Argus at Winston-Salem State University. Brandon is a freelance multimedia expert with professional experience in graphic design, videography, interactive news, and front-end web development. He interned at several news organizations, including the New York Times Student Journalism Institute. He also worked as a graphics reporter/multimedia journalist at the South Bend Tribune (Indiana). As a freelance multimedia specialist, he has directed and produced several hip-hop music videos and urban mini-documentaries. Coley earned his B.S. in Computer Graphics and Animation at Winston-Salem State University. He won several state-wide and national awards for his editorial cartoons and multimedia projects. He has also served in the U.S. Navy for six years.