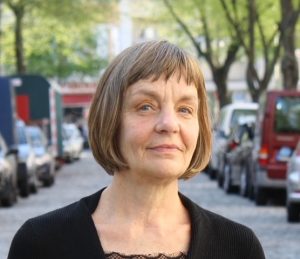 Regina Krex was born in a village near Berlin and is a veteran journalist who has covered the region from before the unification of Germany until the current day. She began by freelancing for the newspaper Neue Zeit, and the magazines Das Magazin and Für Dich mainly on arts and culture and women’s and family issues. After the Berlin Wall fell she wrote theater reviews, profiled artists, and covered cultural developments on the east side of the city for Berliner Morgenpost, one of three most influential dailies in Berlin.

She has worked full time at Berliner Morgenpost since the year 2000 and since 2006 has covered education, the Jewish community and local politics, as well as written commentary, and profiles of prominent Berliners for the weekend supplement of the paper. In 2009, she received the prestigious Theodor Wolff Prize for newspaper journalism. Krex is married to a musician and sound editor and has two adult sons, one of whom is also a journalist in Berlin.