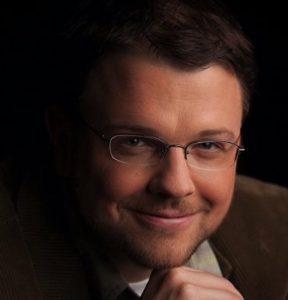 Michael Finch Ph.D., is an assistant professor of communication and student media adviser at Lee University in Tennessee. Finch worked as a journalist and then became a Poynter Fellow before he became a professor. He received his Ph.D. in communication from Regent University, where he completed a dissertation about resistance and identity among minority subcultures in the Soviet Union. Finch restructured his university journalism program from a traditional, legacy style program into a “multimedia” journalism program, preparing students for the converged social/digital media professional world. Many of his graduates already work at local, regional and national news organizations in print, digital and broadcast formats. Finch led international trips to Costa Rica, Ukraine, Poland, Australia and New Zealand. Five years ago Finch accepted a position at Lee university where he advised the award-winning Lee University student newspaper and yearbook, and also developed a student-directed web-show at the university. He has a lovely wife, Paula, and 4-year-old son, whom he loves to take rock climbing. Finch oversees the Bologna Project and will teach some elements of social strategy and advanced reporting, and will be involved in mentoring students as they create content.)