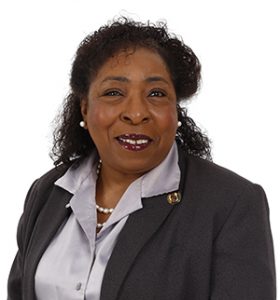 Maria Williams-Hawkins, Ph.D., (multimedia faculty) is an associate professor of telecommunications at Ball State University in Indiana, where she has taught since 1993. Dr. Maria teaches courses in international media and media criticism, and she has taught reporting, news writing and photography. Before earning her doctorate from The Ohio State University, she was a journalist at TV stations in Memphis and Warrensburg, Missouri. She has been the anchor and co-producer of multicultural TV talk shows, and she is an ordained minister.
“Dr. Maria” is adviser to Ball State’s NABJ and the Black Graduate Student Alliance and former convener of Kaleidoscope, a conference that introduced students to media anchors and executives from around the region. She was the anchor/co-producer of gender and multicultural talk shows on WIPB-TV and the winner of the university’s first Diversity Advocate Award.