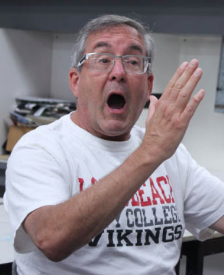 Gary Metzker has been a full-time lecturer at California State University, Long Beach, since 2008 and serves as design adviser for the Pinnacle and Pacemaker award-winning Daily 49er and DIG Magazine. For almost 25 years, he worked at the Los Angeles Times as sports news editor, metro news editor, A-1 editor and senior editor. During that time, Metzker was a part of four Pulitzer Prize-winning staff awards for breaking news and spot news.