Apply now to reserve your place in Berlin, Germany.

GENERAL LOCATION: Berlin, Germany (Surrounded by the state of Brandenburg).

PARTNER UNIVERSITY: Transfer credits provided by the University of Jamestown.

Guided and mentored by a team of accomplished journalists and professors, students report, write and produce media from the cultural capital of today's Europe, on topics from art and architecture, to the politics and economics of global migration, to sustainable living in the face of climate change.

Berlin is the political and economic center of the continent and home to a pulsing counterculture. It is an international hub for creative young people while its very stones and street corners hold reminders of its darker histories during the Communist, Nazi, and Prussian eras. 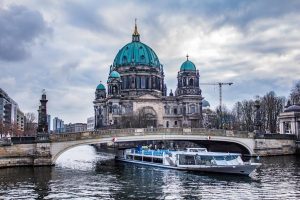 A tourist boat on the Spree River passes the Berlin Cathedral on Museum Island, a Unesco heritage site.

"There is nowhere in the world where you have seen such enormous changes in such short times," said author and journalist Peter Schneider, who has written three books on Berlin. "For the good and for the bad, these enormous changes make the character of the city and of the people who live here."

Our 3-week summer course focuses on telling the stories of Berliners, Germany and Europe, across media platforms. That includes reporting, writing, photography, video and social media. The beginning of the program features classes in basic skills, such as how to find a story in a foreign culture, how to interview with the help of an interpreter and how to write, edit and produce features.

After a breakfast meeting each day, students head out into the community to interview, often with faculty accompanying them. Together, as a group, we interview writers, filmmakers, journalists and diplomats. On the 4th of July we team up with Americans living in Berlin at an event hosted by the local German-American friendship organization.

"Berlin, the greatest cultural extravaganza that one could imagine."
— David Bowie, rock musician

Each year our students produce stories that may appear in Berlin Beyond Borders, a publication on medium.com. These prove to be valuable portfolio pieces that boost student credentials as media professionals when looking for jobs and internships. Students also post to the Berlin Beyond Borders Instagram, Facebook and Twitter feeds. 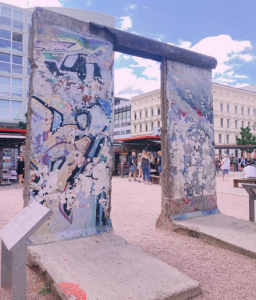 A piece of the Berlin Wall, near the former Checkpoint Charlie crossing point between East and West Berlin.

A city of neighborhoods – nine times the size of Paris in area – Berlin teems with different ethnic groups and affordable eateries, concerts and events. Especially in the summer, locals spill out onto the sidewalks in the cafes of Kreuzberg, Prenzlauer Berg and so many other districts.

Berlin is Germany’s greenest city with 44 percent of its area comprising waterways, woods, rivers and green spaces. A community-conscious but relaxed vibe can be felt in the many large parks within the city, from the Tiergarten next to Germany’s capital buildings to the former Tempelhof airport which has been reclaimed as parkland. Many choose to discover Berlin on bicycles which can be rented on many street corners and can be taken onto the U-Bahn and S-Bahn lines of the city’s world-class transit system.

"You are crazy, my child. You must go to Berlin."
— Franz von Suppé, 19th century Austrian composer

With about 170 museums of all types, there are too many landmarks and cultural sites to name. Find sections of the Berlin Wall, which stood from 1961 to 1989, or visit the former Checkpoint Charlie Cold War border crossing, the Topographie of Terror exhibition on the site of a World War II Gestapo jail, or the East Side Gallery, a mile-long mural painted by more than 100 international artists in 1990 when the Cold War ended.

As a group we will spend a day in Potsdam at Sanssouci, the summer palace of German emperor Friedrich the Great and at Cecilienhof, where the four Allied powers negotiated the treaty that ended World War II. We will also watch the sun set over Berlin from the dome atop the Reichstag, Germany’s parliament building, restored and renovated in 1999, after the country reunited. 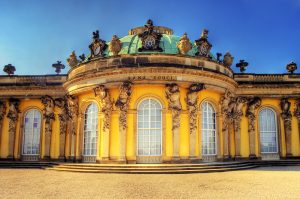 Sanssouci, the summer palace of German emperor Frederick the Great in nearby Potsdam.

The first Sunday is reserved for a group trip to Potsdam, but students will have Saturday to explore on their own.  The middle weekend will be available for free time or a trip to Prague, a five-hour train-ride away.  Dresden is a two-hour train ride. And the Baltic seaport of Rostock is also possible as a day trip or overnight.  Distances are great, so more extensive tourism in Germany or other parts of Europe should be planned for before or after our 3-week course.

Students may earn three credits of an upper-division journalism elective for this course, four credits for schools in the quarter system. The credits will be issued by the University of Jamestown, and we will work with you so they are easily transferable to your university. Transfer credit ultimately depends on a student's home university and department.

Program participants will stay in student apartments attached to a high-end hostel in the center of town.

Students should bring their own laptop computers and mobile phones, as well as digital or video cameras and audio recorders if they have them.

There is no formal German language instruction during this course, but an orientation will cover the basics for getting around. Students are welcome to come earlier or stay longer to add a language course. Students will work with program faculty and guest interpreters for help on any interviews where sources do not speak English. 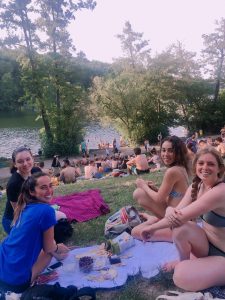 Students from California take a break from the heat at Schlactensee lake while on their reporting trip in Berlin.

"People of Berlin – and people of the world – the scale of our challenge is great… With an eye toward the future, with resolve in our hearts, let us remember this history, and answer our destiny, and remake the world once again."
–Barack Obama, U.S. President, July 2008

Most of our students are journalism or communications majors, but those majoring in other subjects are welcome as well. For non-journalism/communication majors, experience working for a college or professional publication is helpful but not necessary. The program is open to English-speaking students and recent graduates from around the world.

Graduate students are also invited to apply. We’d be happy to talk with you about supervising an independent project that would qualify for graduate credit at your school — or to offer this experience as a graduate internship.

Nomi Morris is a lecturer in the Writing Program at UC Santa Barbara and director of the journalism track in the university’s professional writing minor. She covered the opening of the Berlin Wall for The Toronto Star newspaper and was based in Berlin from 1990 to 1995, the latter half as TIME magazine’s correspondent. Morris went on to become Senior Writer for international at Maclean’s, Canada’s national news magazine and then Middle East Bureau Chief for Knight Ridder Newspapers (now McClatchy). Since moving to California, she has written for Newsweek, the Los Angeles Times, the Los Angeles Review of Books and other magazines and literary journals.

Amara Aguilar is a digital journalism associate professor at the University of Southern California’s Annenberg School for Communication and Journalism. She teaches journalism for mobile/emerging platforms, social media, visual journalism, and interactive design, among other courses. Amara has written for the Los Angeles Times, CNN and other outlets. She has worked as a designer, visual journalist, reporter, social media engagement producer and consultant.

Barbara Demick is an award-winning journalist and author with a specialty in foreign affairs. She was bureau chief for the Los Angeles Times in Beijing and Seoul, and previously reported from Berlin, the Balkans and the Middle East for the Philadelphia Inquirer. She is the author of three books, most recently Eat the Buddha: Life and Death in a Tibetan Town (which was named as one of the best books of 2020 by the New York Times, Economist, Washington Post and Financial Times). She was a press fellow at the Council on Foreign Relations, a Bagehot fellow in business journalism at Columbia University and a visiting professor of journalism at Princeton University.

INTERPRETER/RESEARCHER
Regina Krex is a native Berliner and a veteran journalist who has covered the region from before the unification of Germany until the current day. She has worked full time at the leading Berlin daily the Berliner Morgenpost for the past two decades and since 2006 has covered education, the Jewish community and local politics, as well as written commentary, and profiles of prominent Berliners for the weekend supplement of the paper. Krex is a recipient of the prestigious Theodor Wolff Prize for newspaper journalism.

The cost is $4,995 + airfare. That includes 3 credits of tuition (4 for students on a quarter system), accommodations in student apartments, travel insurance, welcome and farewell dinners, city walking tour, and a day trip to Potsdam. Graduates and students who do not need credit can deduct $450 from the program cost.

Students studying abroad for the summer term have limited financial aid options, but Pell grant recipients are encouraged to apply for a Gilman Study Abroad Scholarship, which range from $2,500 to $5,000 for summer programs. A number of ieiMedia students have received these grants. Check with your school’s financial aid office and your study abroad offices to find out if other assistance is available. More information on financial aid is available here.

Students must fill out the online application and include contact information for two references using the “Apply Now” link. A $50 non-refundable application fee is required with the application or else the system will not accept it.

TRAVEL ADVISORY: ieiMedia will be monitoring the situation with COVID-19 and will provide status updates to those who sign up for the program.

VACCINATIONS: Students must be vaccinated against COVID-19 to participate in the program.